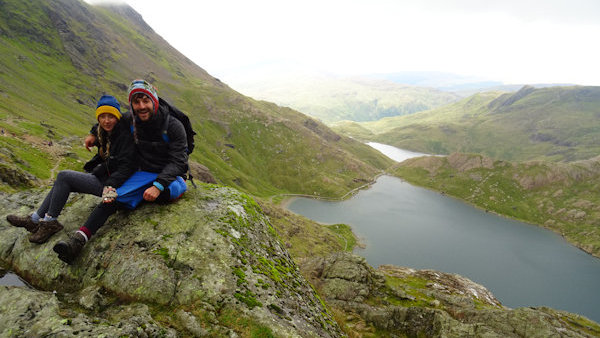 There’s only a certain amount of times you can hear ‘where do you get your protein from’ without getting frustrated. It’s astonishing the amount of people we meet who still see veganism as a radical diet lacking nutrients and energy. So, we decided enough was enough. My partner Sarah and I set out to prove that two tree hugging vegans can take on one of the hardest outdoor challenges in the UK; the Three Peaks Challenge by bike!

You’ve probably heard of the Three Peaks Challenge, right? For those who haven’t it’s climbing the 3 tallest peaks in England, Scotland and Wales in as little time as possible. The vast majority of people do this by being driven from one peak to the other. This challenge sounded right up our street but we didn’t like the aspect of driving. You see, as well as being passionate vegans we’re also diehard environmentalists and driving from one side of the UK to the other seemed a bit unnecessary. This is how our Three Peaks Challenge by Bike was born. We’re going to be climbing Snowdon in Wales, Scafell Pike in the Lake District, and Ben Nevis in Northern Scotland but instead of being driven we’re going to be cycling the 550 miles in between. To keep the challenge as sustainable as possible it will be completed unassisted by carrying all of the gear with us on our bikes and camping for the entirety of the journey. Our goal is to complete this crazy challenge in less than 7 days!

Sounds pretty tough? We thought it would be just the thing to prove that vegan diets are more than enough to support all of your challenges in life, no matter how extreme.  We also want to encourage others to have their own sustainable adventures and discover the possibilities around them before jetsetting to the other side of the world.

Not only do we want to promote sustainable vegan lifestyles we’re also using the opportunity to raise money for charity. Friends of the Earth are an incredible organization who do so much behind the scenes protecting the environments that we cherish. Whether it’s working to stop fracking, habitat destruction or plastic pollution, Friends of the Earth help to protect this planet and all of it’s inhabitants. To us, environmentalism and veganism go hand in hand, so this was the perfect opportunity to help support an incredibly worthwhile cause.

Having recently moved back to the UK after living in Hanoi we knew wanted to take on a big outdoors challenge before leaving the UK again next Christmas. As soon as we decided on the Three Peaks Challenge by Bike at Easter time we began training and planning. It was only when we began planning that we realized the extent of what we had committed to. The challenge will begin at the end of September this year. For any of you who have climbed these peaks will know the weather can be terrible even in the middle of the Summer. At the end of September there could be snow on the peaks and temperatures dropping below freezing. These peaks also have a habit of fogging over which leaves many hikers stranded every year. To survive we need to have all of the right gear with us but with light enough loads to carry it all on our bikes.

To achieve our target of completing the route in 7 days will require cycling over 100 miles a day and climbing the tallest peaks in the UK and then cycling for another 5 or so hours. The average day is going to be around 11 hours of blood, sweat and tears and that’s not even including lunch breaks…

To put the record straight we’re by no means elite level athletes but we love an adventure and we’ve got a point to prove. The route is meant to be wonderfully scenic so we’re hoping that it will take our minds off the pain. Since Easter we’ve been training crazy hard and have been going on training trips to test out our gear and get ourselves in shape for September. With two very busy schedules we’ve been fitting in 3 training sessions a week and throwing in some rock climbing if we have time. As an example for this week we had a 5 mile run, a 80 mile cycle and a 40 mile cycle and a 5 mile run back to back. I mentioned we’re both busy, that doesn’t even start to explain it! Sarah works full time for a mental health charity and I work for Deliveroo. We also run our vegan travel blog Veggie Vagabonds (www.veggievagabonds.com) and are busy fundraising to try and hit our target of £2000. With such jam packed schedules eating the right food is always a huge priority. We both love to cook and Sarah is a mastermind in the kitchen. Together we’re always throwing together delicious, protein packed vegan food inspired by our travels around the world. When you’re spending 9 hours cycling in the blistering heat or the pouring rain it makes it all worthwhile coming back and cooking a beautiful vegan meal together!

Although the official trip isn’t until September, our challenge began at Easter when we started training. The whole ordeal has made us even more proud to be vegan and the next time someone asks ‘where do you get your protein from’ we’ll have a whole lot to tell them. It makes our training so, so much easier knowing that we have the vegan community behind us so any support or encouragement you can send us will help us push through that extra mile.

We really do have a point to prove and a message to spread so please take a look at our Go Fund Me page where you can find out more about our fundraising campaign, keep up to date with our training and make donations (https://www.gofundme.com/veggievagabondsthreepeaks). All of the money is going to a fantastic cause and we need your help for it to reach as many eyes and ears as possible!