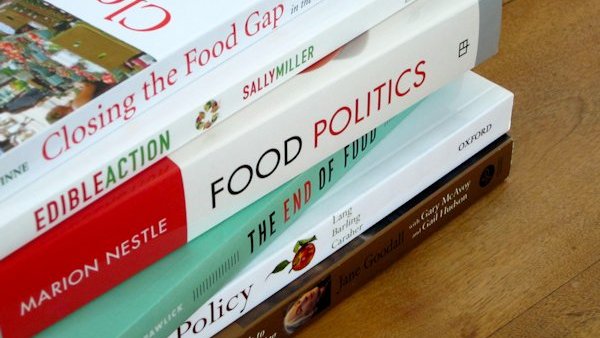 Food Tank, foodtank.org, recommends summer 2013 reading list for eaters and food activists! These books (some brand new, some a bit older) are terrific and worthwhile reads for anything wants to change the food system.

Changing the ways consumers purchase, eat, cook, and store food is important for creating a more sustainable food system. Check out these 13 books that identify and explain the problems in the food system—and how to make changes:

1. Cooked: A Natural History of Transformation by Michael Pollan
Michael Pollan takes back the “single most important thing [to] do as a family to improve our health and well-being”: cooking. A poetic exploration of the beauty and simplicity of preparing food, this book will help readers get off the couch and into the kitchen.

2. VB6: Eat Vegan Before 6:00 to Lose Weight and Restore Your Health . . . for Good by Mark Bittman
Mark Bittman delves into the benefits – to the environment, to personal health, and to the economy – of reducing meat consumption. Without forbidding or condemning meat, this is a great book for the environmentally-conscious omnivore.

3. Bet the Farm: How Food Stopped Being Food by Frederick Kaufman
Bet the Farm starts with an unnerving statistic: in 2008, “farmers produced more grain than ever, enough to feed twice as many people as were on Earth. In the same year… a billion people went hungry.” Kaufman delves into the problems with our food system and uncovers the financial underpinnings that motivate this dysfunctional system.

4. Foodopoly: The Battle Over the Future of Food and Farming in America by Wenonah Hauter
A farmer from Virginia and the Executive Director of Food and Water Watch, Hauter explores the “corporate, scientific, industrial, and political” aspects of the food system in an effort to understand the problems with mainstream production and distribution systems, and how to fix them in order to incorporate healthy, mindful eating.

5. Behind the Kitchen Door by Saru Jayaraman
Exploring the food system from a different angle, Jayaraman points to the deeply troubling labor practices that exist in the food industry. With personal stories and interviews, Jayaraman unveils the low wages and grueling positions that farm and kitchen workers endure.

6. The Last Hunger Season: A Year in an African Farm Community on the Brink of Change by Roger Thurow
Thurow spent a year with four women smallholder farmers in western Kenya to document their struggles in supporting and feeding themselves and their families. He evaluates the extent to which the work of initiatives like the One Acre Fund can help these farmers pull themselves up and defeat hunger and poverty.

7. American Wasteland: How America Throws Away Nearly Half Its Food (And What We Can Do About It) by Jonathan Bloom
Focusing on food waste in the United States, this book takes the issue beyond big farms and corporations to a very personal level. A great introduction to the ways that our own actions are impacting the food system, and what we can do about it.

9. Diet for a Hot Planet: The Climate Crisis at the End of Your Fork and What You Can Do About It by Anna Lappe
Anna Lappe’s Diet for a Hot Planet outlines the ways in which the current food system contributes to climate change, the barriers to a true reform, and what consumers can do to provoke change.

10. WASTE: Uncovering the Global Food Scandal by Tristram Stuart
Uncovering waste in production and processing, the role of supermarkets in passing on wastefulness to suppliers and consumers, and consumers’ wasteful practices at home, Stuart’s book explores the many pathways of waste that exist in our food system. He also provides examples of countries where the food system is working, and offers tips on reducing and reusing food.

12. The Perfect Protein: The Fish Lover’s Guide to Saving the Oceans and Feeding the World by Andy Sharpless
Sharpless argues that seafood will be the best source of sustainable protein for a rapidly growing global population. And he highlights the importance of protecting the health and biodiversity of wild fish populations.