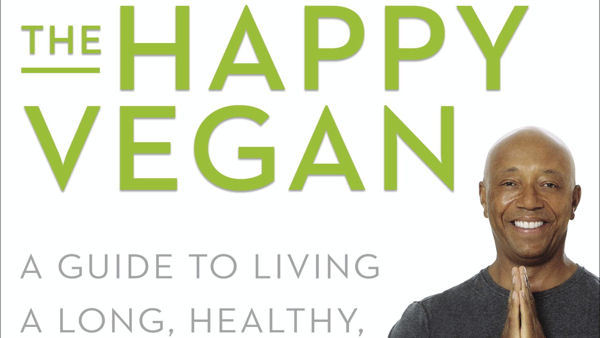 Hip-hop mogul, master entrepreneur, and three-time New York Times bestselling author Russell Simmons offers an inspiring guide to the benefits of conscious eating and veganism. In The Happy Vegan, Simmons shares how once he started practicing yoga and meditation, he became more conscious of his choices, particularly the choices he made regarding his diet. Simmons first adopted a vegetarian and then vegan diet, and almost immediately began to experience the physical, mental, and emotional benefits of eating green and clean. He delves into research about mindful eating, the links between stress and poor eating habits, the importance of listening to your body, the well-documented problems associated with eating animal products and processed foods, along with tips on how to transition to a vegan diet. Drawing on his own experience, the experiences of others, and science and research on the health benefits of conscious eating and veganism, The Happy Vegan is an accessible and inspiring guide to help others make the move toward a vegan diet and a more successful, focused, and purposeful life.

When and why did you go vegan?

I took a great leap forward on New Year’s Day 1997.  I was on vacation in the Caribbean and it was a cloudy day so my friend Glen talked me into watching a film called Diet for a New America, hosted by John Robbins and named after his best-selling book of the same name. As the tape rolled, I was struck by Robbin’s profiles of men in their thirties and forties who were on the verge of death because of the damage meat and dairy had done to their cardiovascular systems. I was also shocked to learn the degree to which the meat and dairy industries were responsible for polluting our nation’s waterways and contributing to global warming.  Equally powerful were the scenes showing the horrible conditions animals are raised in and the barbaric ways they’re slaughtered for their meat.  When the film was over, I told Glen that was it – I didn’t want to contribute to this system anymore and I want my life to be a statement of compassion.

You seem to be very interested in ending the animal suffering.

Yes, The Happy Vegan is dedicated to the billions of animals who know nothing but horrific abuse and a brutal death. My prayer for this book is that it can help relieve at least some of their suffering, as well as the suffering of Mother Earth and her inhabitants, who are poisoning themselves by ingesting death on a daily basis.

What have you learned on your vegan journey?

I’d always assumed I couldn’t live without animal products, but both my body and my spirit were more than happy to let them go.  It’s a relief to disconnect from a system that’s causing harm and suffering.  When you cleanse yourself of that negativity, it brightens your whole outlook. If you cut out animal products and build your diet around plants, you are giving yourself much better odds to not be that one-in-three American who is going to get cancer in their lifetime. Any time you step out of a harmful cycle and into a good one, it’s going to make you feel happier about your place in the world.

What are some misconceptions about eating vegan?

When you give up animal products, it’s not like you’re also giving up delicious meals. Going vegan opens up a whole new world of tastes.  Also, many people don’t realize that there’s plenty of protein in plants.  In fact, many plants have more protein per calorie than meat. The notion that you need animal food as protein is one of the great conspiracies of bullshit by the government.

You are rich and people think it takes being rich to go vegan.

It’s not true that only rich people can afford to go vegan.  Luckily, when it comes to diet, we’re all on the same playing field.  If you ended up replacing all the meat you cooked with vegetables and other plant-based foods, studies have shown you would save about $4,000 per person per year. Extended to a family of four, you could save roughly $16,000 a year by giving up meat. Ordering vegan when you eat out is usually cheaper than ordering meat.  But also consider where you’ll really be saving by giving up animal products: your healthcare costs.  It sounds almost silly to say, but having heart disease is expensive.  Living with diabetes is expensive.  Open heart surgery is expensive.  As is chemotherapy.  When you factor in all those costs, there’s no way you can look at switching to a plant-based diet and say, “I can’t afford to do this.”  You should say, “I can’t afford not to do this.”

What does eating animal products do to one’s body?

What is your advice for people to quit dairy products?

Milk does not do a body good – it’s liquid cholesterol.  Try things like a soy-based sour cream on vegetarian chili, have a bowl of almond milk ice cream…there are so many dairy substitutes out there that are going to allow you to enjoy cheeses, ice cream, and milks without the harmfulness and suffering (to you and the animals).

What is your advice for people who would like to transition to a vegan diet?

When transitioning to a vegan diet, it’s not enough to only remove animal foods from your diet. You also have to add in new foods, otherwise you’re going to become bored by your food options.  I have a good friend this happened to.  He decided to give up meat and found that he didn’t actually miss it that much at all.  What he didn’t do, however, was work on finding new plant-based dishes to replace the animal foods.  As a result, he ended up eating a lot of pastas, breads and cereals.  After a few months of living that way he told me that going vegan “wasn’t working for him” and he was going to start eating meat again.

Whatever type of dish or taste you’re looking for, there is likely a vegan version of it out there. From your grandmother’s meatballs to your mother’s chicken casserole, if you type the name of the dish plus the word vegan into Google, you’re going to find plenty of options.

Make sure you eat fruit at least a couple of times per day.  Nuts are also a great go-to snack full of healthy omega-3 fatty acids.

What foods do you recommend?

Leafy green vegetables should be the foundation of your plant-based diet.  These are the plants that are going to give you all the protein you need. Plus since they are filled with fiber and vitamins, they are going to give you more energy and help boost your immune system.  They’re also rich in antioxidants which means they’ll decrease your risk for cancer, heart disease and other illnesses.  Rule of thumb is that green vegetables always taste good sautéed with garlic.  Whether you eat them sautéed, in salads, soups, stir fries, or just raw, you want to incorporate as much of these greens into your diet as possible.  Another way I try to make sure I’m always getting enough greens is through juicing.

Along with leafy greens, beans and legumes should be the other pillar of your vegan diet. According to the FDA, a single half-cup serving of beans or legumes will provide you with 15% of your daily recommended protein and 20% of your fiber.  A legume refers to any plant that carries its fruit inside a pod.  There are over 18,000 types of beans/legumes!  There are hundreds of great bean dishes out there, including bean burritos, salads, chili, casseroles, soups, and even breads and desserts.  I love white bean and Tuscan kale stew.  Lentil loaf is a great substitute for meat loaf.  I also love curried lentils (dal).

Root vegetables like carrots, potatoes, beets, turnips, parsnips, and rutabagas are some of the healthiest foods you can eat.  All you have to do is chop them up and roast them in the oven.

Spices and seasonings are the most exciting part of being vegan – welcoming new flavors into your life, exploring ways other cultures traditionally flavor their foods, and rediscovering your own heritage through herbs and spices.

Order book on Amazon.com: The Happy Vegan: A Guide to Living a Long, Healthy, and Successful Life