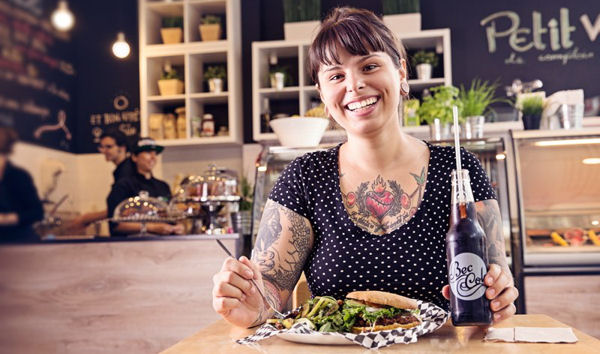 Feeling a little down with the cold November coming up ahead? Did you know November is World Vegan Month? Take a vegan-friendly city break to cheer you up!

Depending on where you are in the world, November may well be a month where you’ll be mourning the warm summer days that have gone, while preparing for a long and cold winter ahead. A city break holiday is always a good idea to cut the winter in two and make the season go by faster. Besides, winter-time truly is the best time to visit cities: the hotels are cheaper, there are fewer tourists around so the sights are a lot less crowded, and the cities look amazing under a blanket of snow.

So pack your bags and get ready to go! Here are our top city break destinations for 2017.

Montreal has got to be the most French of all North American Cities. Its wide boulevards lined with cute little European cafes, widely-spoken French language and tall skyscrapers make it a city like no other, at the intersection of Europe and America. The city is as diverse as it is charming and the cuisine is a happy mix of all this. You will find a healthy dose of vegan greasy spoons, combined with nutritious vegan and raw vegan fine dining restaurants, cooking schools, animal-friendly cafes, a fully-vegan grocery store and so much more. Just make sure you pack all your warmest clothes, as it can get pretty chilly.

Spread across fourteen islands, Stockholm is the beautiful capital of Scandinavia and one you should put on your bucket list for many reasons. The city is rich in natural wonders, architecture and museums, the people are wonderful and the vegan food scene is second to none. There are thirty-four 100% vegan restaurants scattered across the city and several more vegan and vegetarian-friendly options to pick from. The Swedish tradition of “fika”, a mid-morning coffee-and-cake break, is something you don’t want to leave without experiencing. It’s also perfect for chilly winter holidays. And guess what? You will find vegan cake everywhere.

The capital of Germany is also dubbed the vegan capital of Europe — and with good reason. Several Berliners are vegans, and Happy Cow lists no less than 154 fully vegan restaurants! Not only will you be able to find several restaurants offering a vegan version of the ubiquitous currywurst — a fried sausage drenched in ketchup and curry spice — you’ll also find a fully vegan grocery store, vegan pastries and cakes, vegan bars and pubs, vegan fashion designers, and so much more. Berlin is known for being “poor but sexy” (an expression coined by the mayor) and this is reflected in the low cost of accommodation, food, transport and activities — all of which are relatively low when compared with the rest of Europe, especially in Winter. Berlin is a fantastic option for a cheap city break in Europe.

In 2014, PETA declared New York as the most vegan-friendly city in America, and the city so good they named it twice continues to make it to the top of the list year after year. It is an understanding city as a whole; all of your dietary requirements will be accommodated and never frowned upon. New York is also a huge city that is worth visiting and revisiting, only if for being able to make the rounds to all 115 fully vegan restaurants that it hosts. Of course, don’t forget to go ice skating amid the soaring skyscrapers at the Rockefeller Center.

A UNESCO World Heritage location, Amsterdam is gorgeous and romantic year-round, but especially picture-perfect come winter time. When the sun sets, the colorful streets come to life with fairy lights, and the blanket of snow transforms the compact city center into a romantic backdrop that’s worthy of a Christmas card. A city break in Amsterdam at this time of year is especially perfect to head to Vondelpark and build a snowman! Work up an appetite before visiting any of the fifty-plus fully vegan restaurants the Dutch capital has to offer.

Parveen Nanda is the health-minded blogger and travel specialist behind Luxtripper: a website supplying four and five-star hotels and end-to-end package holidays.