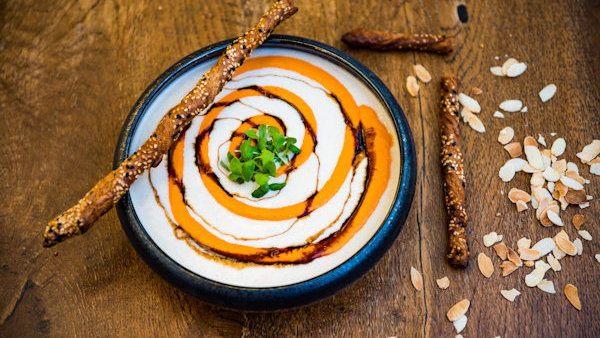 During these hot summer stretches, we’re all craving dishes that are refreshing yet satisfying, cooling yet comforting. Cold soups like Gazpacho are a regular go-to, but the Spanish Ajoblanco soup, while much lesser known, is much more dynamic and rich.

Israeli chef & restauranteur, Merav Barzilay has created a quick, easy and VEGAN version of this traditional dish at her legendary plant-based restaurant, Meshek Barzilay, in Tel Aviv. While originally from Granada and Malaga, it’s no surprise that Telavivians have adopted this traditional Spanish treat in the sweltering heat.

Transfer the bread mixture into the mixer and add the ground almonds, olive oil, garlic and spices and grind well. Slowly add the almond milk until the texture is accurate and desirable.

Broil the peppers 10 minutes on a high heat in the oven and then transfer to a closed container and let them sweat until they can be peeled easily. Sprinkle them with olive oil, garlic and balsamic vinegar and rest for about an hour until it cools.

Puree the peppers and garlic into a cream and season with Atlantic Sea Salt.
The Ajoblanco soup is wonderful when it’s cold, splashed with red pepper cream.
Recommended to serve with roasted almonds, crackers & basil leaves