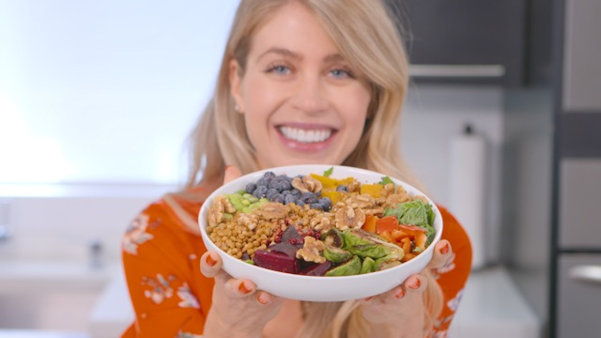 Through her teens and early 20s, chef and filmmaker Dana Giesbrecht (@therawmermaid) struggled with eating disorders, never feeling her body or her looks were good enough. Spending years starving herself and making herself incredibly ill in the process, family and friends worried how long they’d have her around.

But the discovery of veganism a few years ago was a lightbulb moment for Giesbrecht, allowing her to conquer her fear of food and become stronger and healthier, than ever before.

“My family think it’s hilarious because I pretty much never stop eating now,” she laughs. “Veganism really saved my life.”

Thursday, November 1st is World Vegan Day 2018, making it the perfect time for Giesbrecht to launch an ambitious Kickstarter campaign that will allow her to open the world’s first raw vegan restaurant in Winnipeg, MB.

‘‘Other major Canadian cities like Montreal, Vancouver, and Toronto all have lots of amazing vegan fast food restaurants, with incredibly delicious plant-based food and huge line-ups out the door,” says Giesbrecht.  “Winnipeg has only a couple vegan options and nothing raw.  It’s time to change that!”

Calling her campaign, “I Like It RAW”, Giesbrecht’s Kickstarter will go for 30 days starting on World Vegan Day (November 1), where she aims to raise $50,000 to open the restaurant.

Some of the dishes for the restaurant include bright, flavourful “Buddah Bowls” (like the Winnipeg Harvest Bowl pictured above), vegan burgers, vegan pasta dishes, soups, smoothies, juices, and gooey vegan desserts.

Giesbrecht cites 70% of the world is reducing its meat consumption in recent years and there’s been a 600% increase in North Americans identifying as vegan in the past three years, as the reason for why now is the perfect time to bring her restaurant idea to life.

“Although there has clearly been a growth in acceptance of plant-based diets, I think a lot of people still have a misconception about how delicious it is! And there are countless studies showing the ways it helps our planet and our health when we reduce our meat consumption,” says Giesbrecht.

In 2016, Giesbrecht released the documentary ‘I Like It RAW- RAW Veganism in Beef Country’, followed by the launch of her online ‘I Like it RAW’ diet program.

Giesbrecht has returned to her home city of Winnipeg to attempt to open the ‘I Like It RAW’ Restaurant. Her hope is to not only launch in Winnipeg, but eventually have franchises across Canada and around the world in order to make vegan food more accessible to everyone.