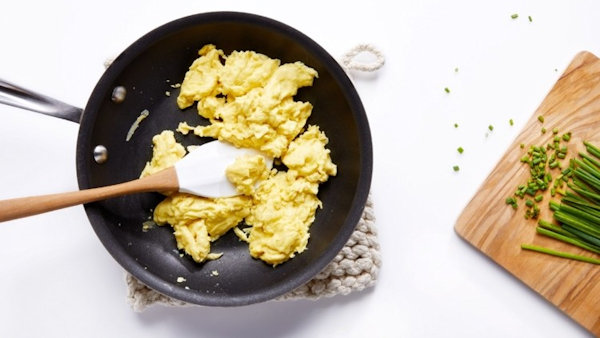 JUST, a company that applies cutting-edge science and technology to create healthier, more sustainable foods announced that its plant-based, protein-packed JUST Egg is launching in select U.S. retailers this fall, expanding to many more grocery stores by the end of this year and into early 2019.

JUST Egg is egg-free and dairy-free, with no cholesterol, no artificial flavors and its ingredients are more sustainable than conventional chicken eggs. Shoppers at a number of stores will be able to find JUST Egg, which is perfect for omelets and scrambles, in the refrigerated egg case alongside conventional chicken eggs and other egg-based products.

Retailers adding JUST Egg are excited about its potential to expand the category and appeal to new demographics of shoppers at a time when a growing number of consumers are looking for breakfast options that are healthier and provide protein.

One chicken egg is a cholesterol bomb — you would have to eat 20 strips of bacon or 3 Big Macs to equal the cholesterol in one single chicken egg, a major contributor to Heart Disease, America’s #1 killer.

In a recent survey of potential JUST Egg customers, a whopping 90% of those who said they would buy the product do not currently purchase fresh or liquid eggs. Some of the first supermarkets to carry JUST Egg include chains like Fresh Thyme and Hy-Vee in the Midwest; Gelson’s, Mollie Stone’s and Nugget Markets in California; and Wegmans in the Mid-Atlantic and New England. JUST Egg’s retail launch comes on the heels of the company’s agreement in principle with one of the largest egg producers and distributors in the world to bring the innovative product to Europe.

Simultaneously, JUST has been accepted into Amazon Launchpad, the e-commerce giant’s accelerator for promising new brands. The program provides resources, expertise, and infrastructure that enables young companies to sell and deliver innovative products like JUST Egg to millions of Amazon customers.

As JUST Egg debuts in retail, JUST is expanding the product’s availability to restaurants, corporate cafeterias, school campuses, hospitals and stadiums in both pourable liquid and baked patty formats through Sysco, US Foods, UNFI, and other distributors. Early restaurant partnerships have shown JUST Egg can drive new business. One reported JUST Egg led to a 42 percent increase in egg category sales and a 13 percent increase in total breakfast sales. Another reported that after adding JUST Egg to the menu, 30 percent of egg-related orders were made with the product.

Vegan JUST Egg, made from mung beans, has been named one of the ’10 Smartest Sustainable Products of 2018′ by Time magazine.

The 7 Day Vegan Challenge: Plant-Based Recipes for Every Day of the Week