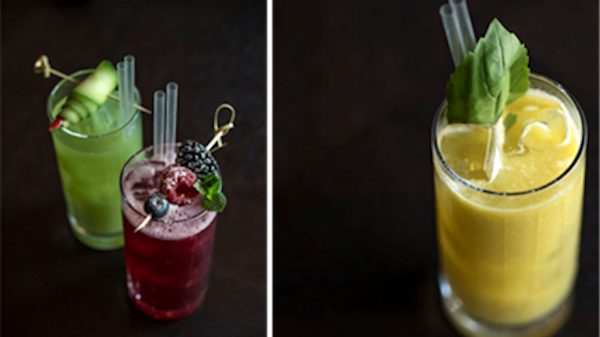 Whether you’re doing Dry-January, Veganuary or both, here are some options for dining out in January – the month of recovery after weeks of indulgence.

Michelin-starred vegan tasting menu at Alyn Williams at the Westbury

Butter and cream are often staples in a classically French Michelin-starred kitchen. However this January, Alyn Williams at The Westbury are shunning meat, fish and animal products and will be offering guests an all vegan tasting menu alongside their usual offering. The seven-course menu (£90pp) makes the most of the great selection of winter fruits and vegetables available, treated with as much care and attention as a piece of meat or fish. It begins with an earthy Beetroot Tartare with radish, followed by Roasted cauliflower steak and seaweed. Next up is Hen of the Woods with a mushroom broth, then Celeriac Pasta with black truffle and Roasted Kohlrabi, hispi roll and a lemongrass velouté finishes off the savories. For dessert, guests will dine on Blood Orange with jam and jelly and finally the classic combination of Rhubarb and Custard with marjoram. The menu will be available from the 17th January.

Vegetarian fine-dining from Steve Groves at Roux at Parliament Square

Guests planning to go vegetarian for January will be well catered for by head chef Steve Groves at Roux at Parliament Square with his delicious five-course tasting menu. The MasterChef: The Professionals winner has selected only the best winter produce for his selection of dishes, beginning with Celeriac served with a light consommé, Saint-Nectaire and hazelnut. This is followed by an earthy Trompette Risotto, then Salsify Gnudi, leek and hen of the woods. For dessert Steve has created a light and refreshing Mandarin, basil and coconut dish, ending on his signature Manjari Chocolate, salted caramel and crème fraiche (£69pp).

Dry January at The American Bar

It would be wrong to visit the renowned American Bar at The Stafford without sipping on a cocktail. Fortunately for those abstaining from the booze, The Scoop provides the perfect non-alcoholic option that is just as glamorous as its counterparts. Combining Seedlip’s non-alcoholic gin with coconut water, aloe-vera, cucumber and mint, The Scoop is a refreshing and detoxing antidote to the overindulgence of the festive period. The Scoop can be found on the A Journey Through St James’ cocktail list priced at £12.50.

Dry January doesn’t need to be boring and the mocktails at Margot are designed to prove just that. They include Felicitá – a fruity combination of mixed berries, pomegranate, cranberry and lemon; Mr Greene – a refreshing mix of cucumber juice, apple, agave syrup and lime and Virgin Yellow Mary, a non-alcoholic version of their signature Yellow Mary which blends yellow tomato juice with horseradish, lemon and green tabasco. Located in Covent Garden, the restaurant is a true celebration of seamless service, refined and beautiful interiors and the authentic food of Italy.

Michelin-starred The Forest Side is designed to be a reflection of the Cumbrian landscape in which it sits, with fresh seasonal produce the underpinning of all that Head Chef Kevin Tickle and his team create. The property’s extensive kitchen garden provides fruit and vegetables all year round, making the vegan menu as locally sourced as it can get – the £80 six course tasting menu includes dishes such as Salt baked turnip, horseradish, L’al Elsie’s pickled green walnuts, Autumn squash, almond, pecan, vintage birch sap and Hedgerow bramble, pine, sorrel, hazelnut. www.theforestside.com

Paul Ainsworth at No.6

British chef Paul Ainsworth has created a vegan menu at his Michelin-starred Paul Ainsworth at No.6 located in Cornwall’s Padstow. With a focus on Cornish produce, guests can enjoy delights such as; Torched orange and chicory salad with hazelnuts, shallots and fennel pollen followed by English onion served with salt baked celeriac, raw mushroom and smoked tea.

Located in Lancashire’s Ribble Valley is the treasured boutique hotel Northcote, with the Michelin-starred restaurant, headed up by Lisa Goodwin-Allen. Northcote has long-been-known for its exquisite food and adventurous menus, and now Lisa has cooked up an incredible 6 course plant-based tasting menu (£67.00) using the finest local and seasonal ingredients. Dishes include Jerusalem artichoke with black truffle, and ‘hen of the woods’, a mushroom bolognaise with squash. The plant-based menu is a vegetarian menu; however, it can be made vegan on request