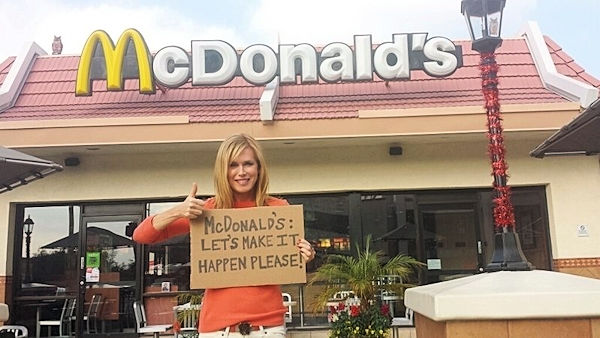 Burger King’s announcement of an Impossible Burger pilot program has reinvigorated calls for McDonald’s to add a meatless patty to its menu. A Change.org petition asking the fast food icon to add a meatless option has garnered over 160,000 signatures including an endorsement from Ellen DeGeneres.

“Plant-based and animal-based burgers have become nearly indistinguishable in taste. The consumer wants options, and so far, McDonald’s has not heard us,” writes Freston. “As the battle for the best meatless burger ramps up, McDonald’s is being left behind by its biggest rival. A full third of us identify as flexitarians – people who are moving away from too much meat – so why not have something for everyone? It’s time to move away from old-school food and into a cleaner future!”

Many families and social circles includes vegans or vegetarians which complicates spur of the moment meals. Adding a meatless item puts McDonald’s back on the menu for everyone.

“Traditionally, vegan and vegetarian options at fast food restaurants have been limited to a few salads or wraps. The outpouring of support for Kathy’s petition shows that people are craving more meatless items,” said Tegan Gregory a campaigner at Change.org. “Whether it’s for dietary, ethical or sustainability reasons people are unifying on the petition and the Burger King news has everyone feeling optimistic that this will be the year that McDonald’s finally takes the leap.”

McDonald’s has played with the idea and in 2017 it released the McVegan in Finland. At the time many called it the ‘best vegetarian burger’ they’ve ever had.

Here is the full link for live signature count and comments: http://www.Change.org/McVegan