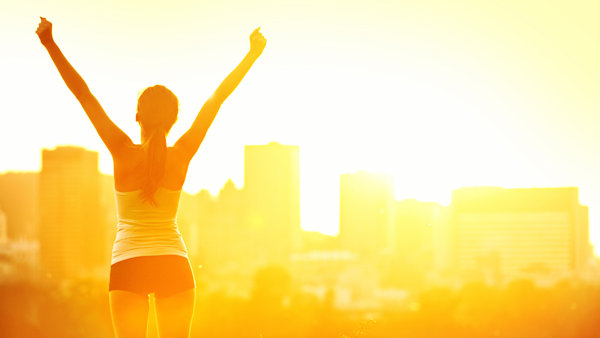 It’s spring in all its magnificent splendor, which means it’s time to get outside to soak up all that vitamin D that you missed during the winter months. One of the downsides of my return to life as a hockey player instead of as a cyclist is that by being a rink rat, I don’t get enough vitamin D the natural way by being outside in the midday sunshine for 10-30 minutes per day. The sun generously provides the vitamin D we need, especially for us plant-based athletes who do not consume cows’ milk, which we’ve been led to believe is packed with this essential vitamin. But how do we get a vitamin just by being in the sun? And for those who live in colder climates (or are chained to their cubicles), are there other ways to get enough without drinking cows’ milk? Spoiler alert—definitely yes.

First off, despite what we have all been taught, vitamin D is technically not considered a vitamin—it’s a hormone. Dr. Milton Mills explains, “Cholecalciferol, or vitamin D3, is a hormone that plays a part in a number of biological functions such as bone metabolism, immune function, and mood and behavior regulation. It also helps protect against a higher risk of certain viruses and cancers.” Dr. Mills is a renowned advocate of plant-based diets who practices urgent care medicine in Washington, DC and has served as Associate Director of Preventative Medicine on the National Advisory Board for the Physicians Committee for Responsible Medicine; in other words, he has the credentials to discern a vitamin from a hormone. The mix-up is similar to the universal acceptance that certain fruits—pumpkins, tomatoes, cucumbers, etc—are called vegetables. For the sake of this column and to avoid confusion, we’re going to stick with vitamin D.

Another crucial note: it is impossible to obtain the recommended daily amount of vitamin D through unprocessed food. It simply does not exist in the natural plant or animal kingdom. But that’s not what the dairy industry wants you to believe.

“The dairy industry started adding vitamin D to cows’ milk to lure people to buy it in the early 1930s when rickets was a concern. We’ve been misled by the dairy industry into thinking that milk contains an abundance of vitamin D on its own, but that is not the case,” said Dr. Mills. “I’ll give that to the dairy industry. They are very inventive and effective with their marketing. They mislead and continue to hurt people with their messaging. We’ve got to counteract it with the truth in order to become or remain healthy. The fact is getting vitamin D from cows’ milk is just plain gross. It’s like someone putting vitamin C into crack cocaine and telling people that crack is a great source of vitamin C.”

The fact is that the only way to get enough vitamin D through food is to eat fortified foods. Fortification isn’t inherently bad (most plant milks are also fortified with vitamin D), but it’s the way the dairy industry manipulates its audience to believe that milk naturally contains this vitamin that gets me (and Dr. Mills) riled up.

“The further people are away from the equator, the more likely they are to need a vitamin D3 supplement. To get it from the sun requires exposure with more than 50% of the body—specifically the limbs and trunk—exposed. If you’re a cyclist or a marathon runner who spends hours in the sun daily while wearing very little clothing, you’re probably okay. But the rest of us do need to take a supplement.”

If you do go the supplement route, make sure that it is a vegan D3, which is more easily absorbed by the body. The other forms use lanolin (sheep’s skin). During the sun-splashed spring and summer days ahead, you’ll catch me outside the rink shirtless and in a pair of shorts stocking up on vitamin D the old- fashioned way. What I learned from my conversation with Dr. Mills is that it’s important to understand all of your options—don’t just fall prey to the marketing or the latest pill that promises results. Sometimes we need to adjust our sources, like taking a supplement during the winter, and that’s okay, as long as we’ve done our research.

Written by Rick Scott, #veganhockeyplayer, on behalf of Switch4Good. Switch4Good is a nonprofit helping others live better and do more by making the switch from dairy to plant-based fuel.