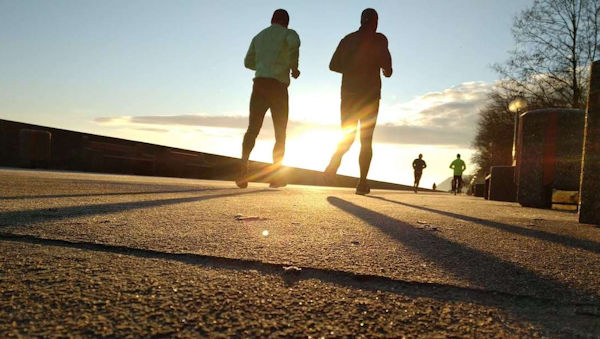 Cardiovascular exercise is generally promoted as a benefit to overall heart health, but as athletes continue to push themselves toward farther distances, they could be doing more harm than good. With the growing popularity of marathons and ultra-endurance races, researchers have found that many of these endurance athletes face an increased risk of atherosclerosis (plaque building up inside one’s arteries) and myocardial damage (decreased blood flow to the heart). However, researchers at the Physicians Committee for Responsible Medicine (PCRM) believe that a dairy-free, plant-based diet may not only provide cardiovascular protection, but also enhance performance, allowing these athletes to continue to go the distance.

In a 2019 review titled, “Plant-Based Diets for Cardiovascular Safety and Performance in Endurance Sports,” the authors analyzed a wide breadth of studies that suggested a plant-based diet offered cardioprotective qualities and other health benefits. The review then applied these benefits to athletes and explained how each could enhance athletic performance. Learn how a dairy-free diet can help you be a true endurance athlete and maintain the miles for years to come.

According to PCRM, those who eschew dairy and other animal products have been found to have an increased amount of lean body mass due to the lower fat content of this diet. This is caused by an increase in energy expenditure following a meal, lower rates of endotoxins (which slow down metabolism), and an increase in VO2 Max, which allows one to use more oxygen during intense exercise. According to our Switch4Good scientist, the more oxygen one is able to use, the more one will experience an athletic “burn.” In essence, all of this leads to less fat on the body while retaining non-bulky muscles one needs to power through mile after mile.

Carbohydrates are broken down into glycogen in the body, and during intense exercise, glycogen is our primary source of energy. Because plant-based athletes tend to eat more carbohydrates than those who consume dairy and meat products (remember, fruit and vegetables are carbs), they can build a higher glycogen storage and truly tap into to their full performance potential. With a sufficient amount of glycogen stored, athletes can outlast those with fewer reserves.

As dairy-free and plant-based diets tend to be lower in saturated fat, fewer lipid particles exist in the blood. This enables the blood to be less viscous (less sticky) and move more freely around the body, delivering oxygen to cells at a rapid pace. This allows the body to be more efficient during exercise, for your cells are not starving for oxygen. Researchers found that plant-based diets also increase the strength of our arteries, which tend to be damaged over time as blood courses through them. Strong arteries are necessary for athletes, as they support the flow of nutrients to our bodies and carry waste products (such as lactic acid) away during exercise.

Exercise inevitably causes minor tissue damage—it’s the building blocks of strength training—the tiny tears in our muscles are forced to repair and over this process grow stronger. Free radicals are a side effect of this tissue damage, and unlike the minor tears in our muscles, free radicals can do major damage to our body, causing both acute and chronic inflammation over time. Antioxidants suppress these free radicals and allow the body to efficiently heal itself. As plant-based foods naturally contain more antioxidants than animal-based foods, athletes who eat plant-based can cut down on their post-exercise inflammation. PCRM also noted that meat-free diets have been shown to lower chronic inflammation as well.

Based on the above findings, the conclusion of this review is rather obvious: plant-based diets are ideal for long-term health and sustained optimal fitness. Many athletes are solely focused on the next six weeks or six months, haphazardly taking animal-derived “nutritional” powders or adhering to a strict animal-based, fat-heavy diet to experience “gains” for their next competition or race. However, these foods could be a detriment to their current performance and their longevity as a competitor. As an athlete, you don’t give up. A plant-based diet helps to ensure your body doesn’t either.

Switch4Good is a nonprofit helping others live better and do more by making the switch from dairy to plant-based fuel.

Fun Fitness Findings: How to Take the Monotony Out of Muscle-Building