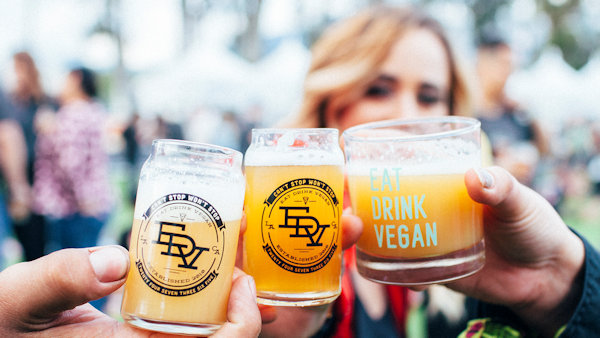 Eat Drink Vegan returns to Pasadena, CA celebrating its 10-year anniversary. After much success over the past 10 years, the festival has grown to become the ultimate day of plant-based food and drinks including beer and kombucha gardens. The first festival in 2009 saw a handful of vendors while this year EDV is excited to invite more a curated selection of 65 vendors from around the world to serve up the best vegan fare to hungry festival go-ers.

Located at the famed Rose Bowl at Rose Bowl Drive, Pasadena, CA on June 22, 2019, guests can join the expected over 10,000 other excited guests looking to find a selection of highly curated restaurants and food vendors. Along with this wide variety which will satiate the hungry, there will be 250+ vegan beverages (inclusive of craft beer, wine, cider kombucha vendors) along with a plant-based marketplace that showcases everything from clothing and candles to packaged foods and skin care.

Get your tickets here starting at $55 (prices went up recently, but GA is currently $55) For those wanting to maximize their experience at EDV, the VIP tickets here, which come with early entry to the festival, access to an all-day fast pass, VIP lounge with exclusive drinks and priority sign-up for Drunken Lotus wine and yoga.

Most exciting this year is the Culinary Stage which will feature five chefs who come from some of the top restaurants here in Los Angeles who will be holding demonstrations from 1pm-5pm. Hosted by USA Men’s Volleyball athlete Dustin Watte and sponsored by Purple Carrot, Mountain Valley Water & Toyota, Roy Choi (Kogi), Mary Sue Milliken (Border Grill, Socalo), Shirley Chung (Ms. Chi), Bruce Kalman (Union) and Marcel Vigneron (Beefsteak and WOLF) will be showing off their culinary skills and tricks to attendees.

A vegan festival mainstay, Cena Vegan will be offering their full menu of burritos, nachos and tacos made with their authentically-flavored plant-based meats which can purchased in retail as well. They are bringing back the O.C Special Burrito and introducing two new items, Crispy Tacos and Tostadas, all made with their Seasoned Beef Crumbles, plus: beans, lettuce, tomatoes, secret salsa, sour cream and nacho cheese.

The first 100% plant-based Italian restaurant and wine bar in West Hollywood, who will be opening a pizza spot next door, is excited to return to this year’s EDV festival. Chef Tara Punzone and team will be serving Mini Lasagna Pura (gluten free) and their customer favorite Carbonara. For dessert take a bite out of Tiramisu (gluten free) or Salted Chocolate Chip Cookies.

The beloved LA local food cart will be opening its first storefront at the corner of 6th and Spring Street in DTLA with a June 24 target opening date. The Tijuana-style taco shop which serves Tacos, Quesadillas, Mulitas and Vampiros will be bringing their Mushroom Taco on a handmade corn tortilla, garnished with cebolla cilantro guacamole y salsa, our mushrooms are sautéed in a house made macha salsa.

Pushing the boundaries of vegan cuisine since 2010 with the launch of their food truck and now restaurants in Costa Mesa and Long Beach, Seabirds brings an artisanal approach to their menu. Along with their Purple Potato Taquitos, creamy Old Town Grilled Cheese, Black Bean and Tempeh Chili, and infamous beer battered Avocado Tacos, they will be serving Zippy Fries, a cheesy, zesty order of nacho cheese fries that is exclusive to Eat Drink Vegan.

Hailing all the way from London, Temple of Seitan has been frying burgers, chick’n and sides daily to hungry Londoners since January 2017 with their first brick and mortar in Hackney. They will be bringing three popular sandwiches, the Temple Classic Sandwich, Garlic Parmesan Sandwich and Nashville Hot Sandwich which is made with “Buttermilk” fried fillet coated in Nashville Hot spices, pickles, lettuce, ranch in a brioche bun to hungry attendees.

Wet your beak and enjoy unlimited pours from returning vendors Arrow Lodge, Sage Bistro Brewery, Modern Times, Flying Embers and many more. And for those who don’t drink, Big Leaf Bucha, Fine Feathers, Dr. Hops and many other brands are bringing the best booch and vegan drinks free for all festival attendees.

To round up the festivities, this year EDV will feather the new CBD Village to chill you out, plus a marketplace, culinary stage, yoga, a 5k run, and exhibiting brands. Find more information about their 5k + yoga here.