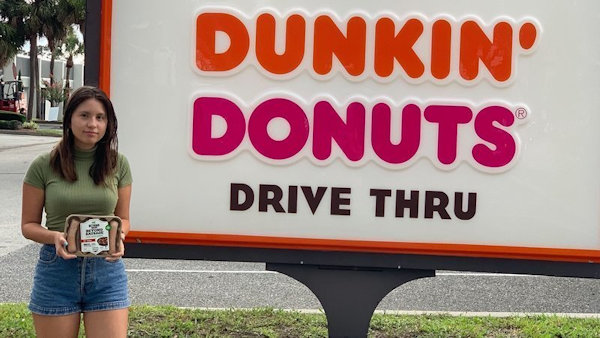 We’re seeing more and more campaigns asking restaurants to include plant-based options. Here is the latest one that is picking up steam.

Lana Weidgenant has fond memories of grabbing a donut and iced coffee from Dunkin’ as a Winter Park, Florida teenager. Environmental and animal welfare concerns caused her to rethink her diet which meant no more Dunkin’ for Lana. With the rise of plant-based options, she is looking forward to becoming a Dunkin’ regular again and started a Change.org petition urging the chain to include Beyond Breakfast Sausages as an option.

After years of building momentum, the plant-based movement is now the hottest trends in food. Burger King reported an 18.5 percent boost in traffic at locations offering the Impossible Whopper over its national average and is now rolling out the burger nationwide. For coffee and breakfast lovers, Tim Hortons launched Beyond Meat Breakfast Sandwiches at nearly 4,000 restaurants in Canada earlier this month.

“Customers want choices and we are seeing more and more campaigns asking restaurants for plant-based options,” said Tegan Gregory a senior campaigner at Change.org. “Dunkin’, McDonald’s, even Kraft are all being asked to consider adding meatless options to their offerings. Diets are evolving and customers need menus to keep pace.”

Lana’s petition can be found at Change.org/Dunkin.