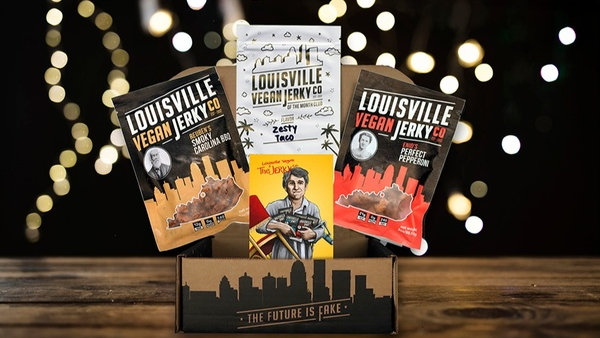 Eight years ago when a kitchen mishap left many of his soy products burned to a crisp, Stan Chase was surprised to find a flavor in those charred remains similar to one he had been craving since abandoning a meat-centric diet. It was the unmistakable chew and smoke of jerky—this time, cruelty-free.

Louisville Vegan Jerky Company (http://lvjco.com) is the first of its kind to offer hand-crafted vegan jerky in the United States. With a product line that includes flavors such as Smoked Black Pepper, Smoked Chipotle, Perfect Pepperoni, Smoky Carolina BBQ, and Maple Bacon; LVJ can appeal to anyone’s dietary preferences.

Most of Chase’s enthusiasm comes less from the number of bags he’s able to sell and more about the culture he’s able to create for his employees and community. They only work with local, American-made products. They also focus to making monthly donations to animal sanctuaries across the country.

For Chase, running a business is like having a personal sandbox to play in. He gets to do things his way, on his time, creating an atmosphere that isn’t about chasing the dollar, but about fostering real relationships with the people around him.

“I’ve been told by old-school business guys that the things I want to do aren’t possible,” Chase says, speaking particularly about his Jerky of the Month Club (think Loot Crate for vegan jerky) and using only American-made products. “But I had my entire business funded in seven hours by three people. That’s our generation. That’s what we do. The ability to get important things done fast in new and exciting ways is a powerful thing.”