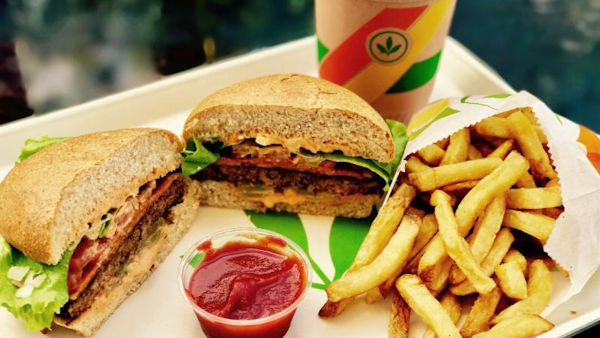 One of the most innovative restaurant chains in Southern California, Plant Power Fast Food, is now open on Pacific Coast Highway in Long Beach. The chain combines convenience and taste with a 100% plant-based menu that appeals to the exploding segment of diners who want to enjoy their tried-and-true fast food favorites in a healthier experience that is good for the their health, the health of the planet and of the animals.

Plant Power Fast Food replicates the fast food experience in a quick service setting that is perfect for Southern California’s on-the-go lifestyle. Several of their locations, including the new one in Long Beach, even have a drive-thru!

The Long Beach restaurant is Plant Power Fast Food’s fifth. The company debuted its first store in 2016 in the Ocean Beach section of San Diego and has since expanded to the Inland Empire and two additional locations in San Diego, including one on the campus of San Diego State University.

Along the way, Plant Power Fast Food has won a burgeoning fan base and the company states that the majority of its customers are omnivores, rather than vegans or vegetarians, who are looking for a healthy and delicious alternative to fast food, which further indicates that the chain is deliciously replicating the fast food staples that Americans love.