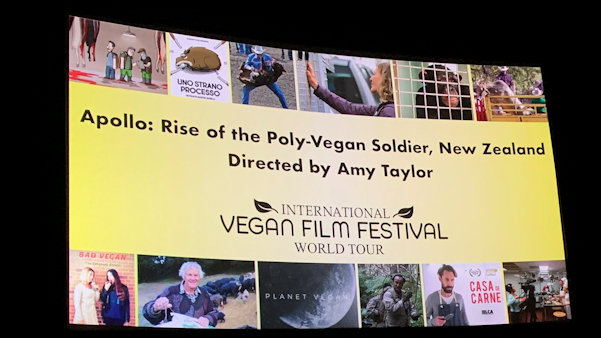 The Festival’s 2019/2020 world tour kicked off on Friday, January 24th in Toronto at the Hot Docs Ted Rogers Cinema. The event, hosted by the Toronto Vegetarian Association (TVA), drew an enthusiastic crowd of over 400. Following the Toronto screening, Festival founder Shawn Stratton and acclaimed animal rights photographer and filmmaker Jo-Anne MacArthur held a question and answer session, emceed by the TVA board president Thomas Appleyard.

Films in the world tour highlight the ‘Best of the Best’ short films along with portions of feature films. The screening consisted of 12 films submitted to the 2019 Festival which took place in October in Ottawa. The films range from 2 min to 40 min in length.

The 2019/2020 world tour already has confirmed screenings in numerous locations, including Glasgow, Vancouver, St. John’s, Hilton Head, and Montreal, with new locations being added each week.

The IVFF World Tour screenings are organized by local hosts who purchase a license to hold a screening in their community. World Tour hosting opportunities are available until August 31, 2020. Anyone interested in hosting a screening can view a list of films included in the world tour along with hosting FAQs and how to submit a hosting application here or visit: www.theivff.com

Festival director Shawn Stratton says that he is “very excited to give audiences around the world an opportunity to view a diverse collection of vegan themed films in the screening.” The locally-hosted screenings may be organized by vegan advocacy organizations, businesses, events, theatres, clubs, and by any passionate vegan who can round up an audience.

Hosting the ‘Best Of’ World Tour is a great way to share the excitement, raise money and create or strengthen local partnerships while inspiring vegans to maintain the lifestyle, and to start a discussion and educate those who are vegan curious

Stratton adds, “This is also a unique opportunity for the talented filmmakers highlighted in the Festival to showcase their work to a large audience.”

The third annual International Vegan Film Festival will begin accepting film submissions for its 2020 Festival on February 14th, 2020. The vegan film festival – described by its director, Shawn Stratton, as the world’s first of its kind – is set to take place in October 2020 in Ottawa, Canada and aims to showcase short and feature-length films with vegan subject matter from filmmakers around the globe.

The Festival accepts films from both professional and amateur filmmakers with large and small budgets. The 2019 Grand Prize winner was Bucking Tradition, a short film that exposes the fact that most rodeo events feature some kind of inherent inhumane treatment of animals.

All films will be submitted into 1 of 4 categories: Lifestyle, Animal Welfare, Health and Nutrition, and Environmentalism.

The entry deadline is June 30, 2020, and the festival welcomes ‘vegan-themed films from filmmakers around the world – both short and full-length features, fiction and documentary’.

According to event organizers, all entries will be viewed prior to the Festival by a pre-selection committee chaired by the Festival Director and Programming Director. Finalists chosen by this committee will be screened by an appointed international jury for award consideration.

Festival Director Shawn Stratton said that “A photo essay is a collection of images that tell a story and propel a narrative over multiple images. Photo essays often create a series of emotions in the viewer and are a powerful way to tell a story without relying heavily on text.”

The competition’s goal is to showcase the best in vegan themed photo essays – to recognize the best stories told through a series of 3-5 still images.

We invite photographers to submit photos to illustrate their vegan related stories under the following categories: lifestyle, health and nutrition, animal welfare, or environmental protection.

The Festival’s mission is to: “Be the leading film festival for vegan films that inspire people to choose a healthier, more environmentally-friendly and compassionate lifestyle through the consumption of plants and animal-free alternatives.”