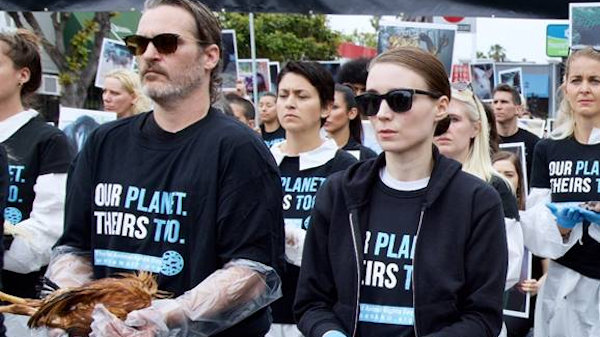 It was a powerful scene that garnered massive media coverage. Led by Academy Awards winner Joaquin Phoenix and Oscar nominee Rooney Mara, hundreds of animal lovers carrying the bodies of deceased animals marched on Beverly Boulevard in the heart of Los Angeles last June during National Animal Rights Day (NARD) to pay tribute to the animal lives taken by human hands. Similar scenes took place in more than 35 cities around the globe. This June 7, the tenth National Animal Rights Day will take place in over 40 cities with the mission of commemorating, educating and celebrating the lives of all animals.

Inspired after a 2010 trip to Spain where he attended an Igualdad Animal (Animal Equality) event in Madrid, Aylam Orian returned to his New York City home determined to do something similar in the US.

“I come from a film and video background, so I know the power of video and images. We attempted to do an event with video screens showing things like ‘Meet Your Meat’ in Union Square. In fact, we found a way to do it in Grand Central Station, the Port Authority and at NYU’s Washington Square Park. It wasn’t exactly a captive audience so we thought ‘How can we bring this message to more people?’,” said the US-born, Israel-raised Orian, an actor-activist who resides in Los Angeles.

Later that year on International Animal Rights Day in Spain, Orian saw that instead of activists playing videos showing how animal lives are cruelly ended by humans for food, entertainment, clothing, pets and scientific testing, hundreds of participants stood silently holding dead animals during a solemn ceremony. The scene impacted Orian hard. He decided to put on a similar event in New York City, which he initially titled “Our Planet. Theirs Too.” As the event neared, Orian decided to use that name for the 501(c3) nonprofit organization leading the event but felt National Animal Rights Day would be a more fitting title.

The first two National Animal Rights Days took place exclusively in the Big Apple, but after Orian relocated to Los Angeles, NARD was held in both cities in 2013. San Francisco was added the next year. Then it grew to eight cities and then 22 cities. Last year, more than 35 major cities held National Animal Rights Day, including such international meccas as Paris, Toronto, Frankfurt, Hong Kong, Perth, Manila and Copenhagen. More cities are aboard for this year’s tenth anniversary NARD.

Orian’s vision for National Animal Rights Day is three-prong: commemorate, educate and celebrate. The first part of the event memorializes the animals. After the funeral-like ceremony that pays final respects to the animals, The Declaration of Animals Rights is read, outlining the inalienable rights of all animals. Just prior to the inaugural National Animal Rights Day, Orian and his fellow activists drafted The Declaration of Animal Rights, which was signed by the participants of the first NARD. The reading and signing of the Declaration have remained poignant parts of NARD ever since, with an ever-growing scroll of paper (now close to 500 feet in length) that has amassed signatures from animal lovers the world over.

The second half of National Animal Rights Day is a festive celebration with live music, entertainment, plant-based food, art exhibitions and informative talks given by prominent animal activists and other influential voices in order to educate the public about the alternatives to using animals and animal products and celebrate the progress made by the animal rights and plant-based movements.

As the tenth anniversary National Animal Rights Day approaches, details will be announced about the specific times and locations. Attendance is free and everyone is welcome.

For more information or to get involved, please visit http://thenard.org. To read The Declaration Of Animal Rights, click on http://declarationofar.org.